An Invasive Species of Potential Concern 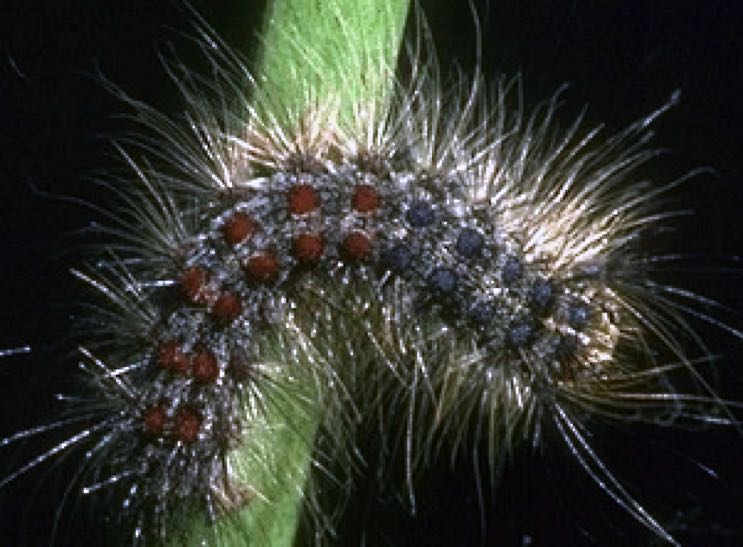 An invasive species of growing concern in the northeastern United States and southern Ontario is the gypsy moth, which is capable of defoliating huge tracts of deciduous trees, usually resulting in mortality. Although they have never been a major issue in Pointe au Baril area, a number of scientists and officials south of the border and in Ontario are predicting a major outbreak next summer based on the number of egg masses observed last fall.¹ With few exceptions, these reports suggest that local control measures by small property owners are often successful in preventing the spread of an infestation.

Ironically, this nasty pest originated in Europe and was introduced to North America in 1869 by a French naturalist living Massachusetts, who hoped to cross breed them with North American silk worms. They have since spread throughout the northeastern United States and into Canada, by attaching their egg masses to various means of transportation, beginning with wagons, small boats, and eventually trains and cars. Now warmer air and increasing drought conditions have advanced the infestations northward. The more destructive Asian variety has also been found in southeastern Canada. Although relatively rare, they can wreak even greater damage. 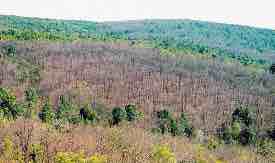 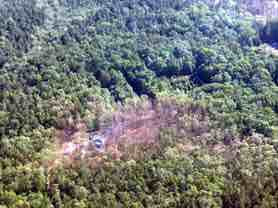 The gypsy moth was first detected in Canada in 1912, when egg masses were discovered on young cedars imported from Japan. The first sizable infestations occurred near the United States border, in southwestern Quebec (1924) and New Brunswick (1936) and both virtually eradicated by intensive control programs. The insect was again discovered in Quebec (1955) and eventually became well established in southern Ontario and elsewhere in Canada. It is classed as a “quarantine pest” under the Plant Health and Production Division of the Canadian Food Inspection Agency and closely monitored. Several provinces and U.S. states have adopted aerial spray control programs to prevent spread of infestations.² 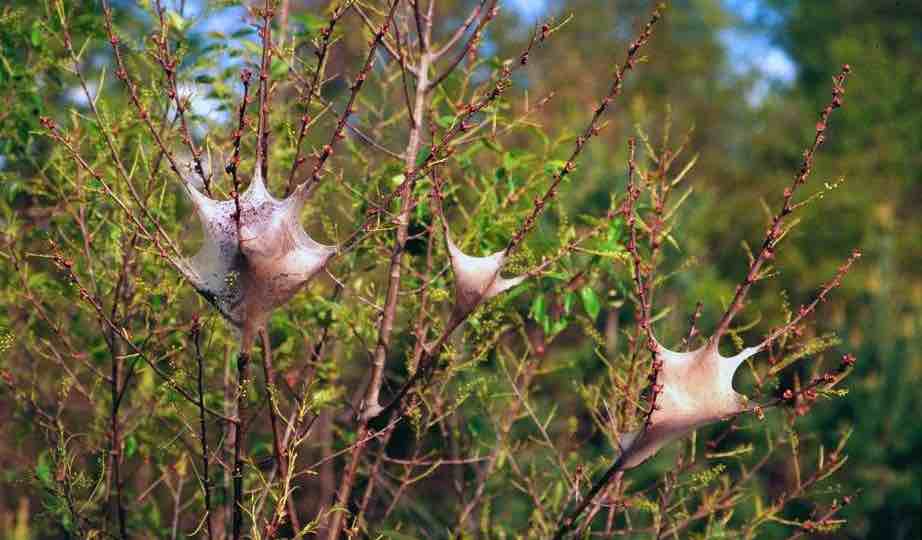 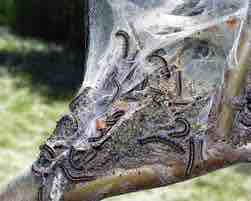 The gypsy moth caterpillars feed vociferously on the leaves of deciduous trees such as oak, white birch and poplar, but will gravitate to white pines in sizable numbers. They also like blueberry bushes. A single caterpillar reportedly consumes an average of a square metre of leaves during its lifetime.3 In drought conditions, defoliation often results in mortality.

Damage is caused solely by the caterpillars, which hatch from egg masses laid the previous summer. One egg mass can produce up to a 1000 eggs. Initially only a quarter inch long, the larvae begin eating small holes in the leaves, creating a lacy effect. But as they grow, so does their appetite.

While still relatively young, the caterpillars produce long silk-like filaments which allow them to be blown by the wind 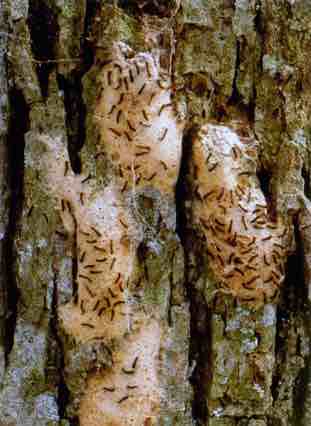 towards a better food source. They have been seen traveling over water, the distance varying according to the
wind velocity. If they land on the water, they simply let the waves take them ashore. New arrivals will feed on low vegetation such as blueberry leaves, before climbing the trunks of trees to feast on budding leaves. Initially they will feed day and night until about an inch long, at which time they will feed only at night and seek shade during the daylight by heading down the tree trunks.

An adult caterpillar can be as long as 2 . inches and is easily recognized by its coarse hairs and double row of five blue and six red dots on its charcoal grey body.

By the end of July, the caterpillars enter into the pupae stage, encasing themselves in brown paper-like shells, often located near the original egg masses. After 9 – 17 days, the moths emerge. The adult male moth, which is brownish in colour, flies around in search of females to fertilize their eggs. The females are white or cream coloured with a few dark spots on their wings. They cannot fly, but simply crawl a few inches from their pupa case and begin laying their eggs.

The egg masses are covered with hairs and a soft insulating substance, which protects them from predators and foul weather, with the exception of exposure to temperatures below minus 20° Fahrenheit. Unfortunately egg masses under decks and in cracks of rocks will be insulated by snow cover and usually survive. 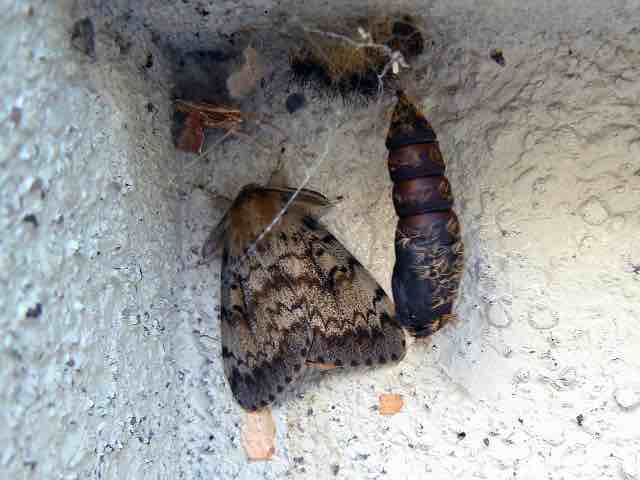 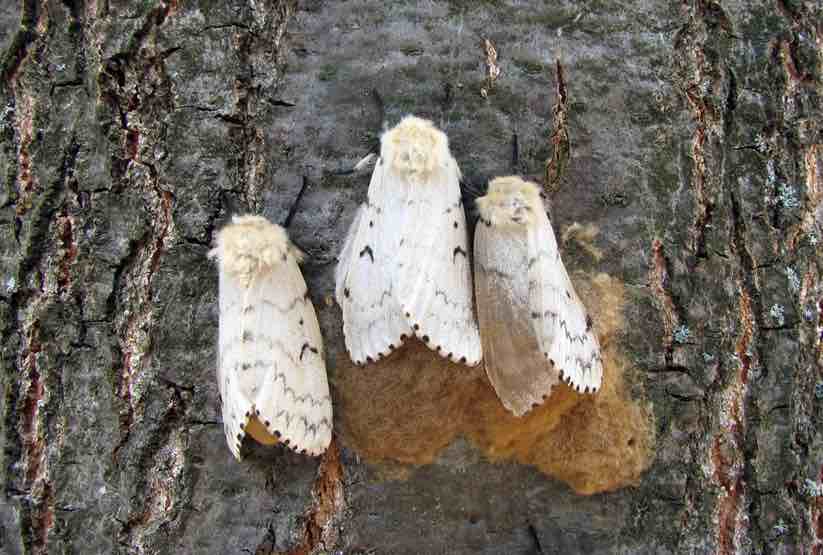 Although total eradication seems impossible, there are a number of means to moderate an outbreak and prevent its spread. In spring, before the larvae hatch, special double-sided sticky tape available at garden centres can be wrapped tightly around tree trunks to capture the young larvae as they travel up to the leafy branches. 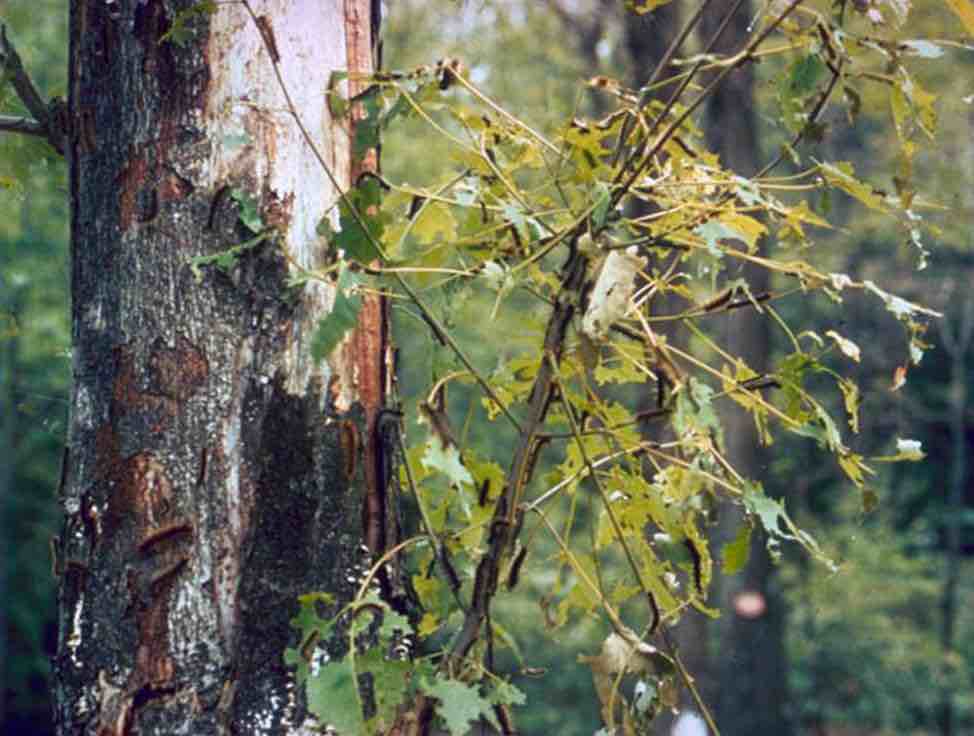 Spraying the upper branches of affected trees with bacillus thuringinensis kurstaki (BTK) is also effective in killing the young larvae – a non-toxic substance that will not affect other insects, vegetation, humans or animals. However, this is only successful when the caterpillars are small, so timing is critical.

Once the larvae have reached an inch or so in length, the best means of control is to wrap bands of burlap around the infested tree trunks, tied in the middle with string and folded over. When the larger caterpillars seek shade during the day, they will gather under the flap. Unfortunately, this control method requires daily removal of the caterpillars before the temperature cools and they head back to the upper branches.

When reaching full size, the caterpillars often congregate near old egg masses before they pupate, a stage which lasts about 9-17 days before the moths emerge. Hence it is not surprising to find numerous new egg masses beside broken pupae cases and the vestiges of old egg masses. Other than manually destroying the cases by squeezing them, there is little more one can do at this point except wait until the moths emerge and eggs are laid.

Once the eggs appear, the most effective means of control is to physically scrape the egg masses off the rocks, tree trunks, undersides of decks, eaves and patio furniture, into a can containing half water and half detergent. After two days these can be discarded into the trash. It is important not to leave any portion of the egg mass behind or let them fall to the ground, as they will still hatch next spring if protected under snow cover. For egg masses higher in the trees, one suggestion is to use a hand vacuum with a long wand.

BioForest Technologies have supervised hanging of pheromone traps in infested areas, including our one acre island. We have always had a moderate population of gypsy moths which, until last year, we were able to keep under control. The traps attract male moths by duplicating the scent given off by the females, but they are not considered effective in controlling major infestations as the males will likely have fertilized a number of females before being caught. Their primary purpose is to allow BioForest to collect statistical data so they can track the spread or decline of existing populations. 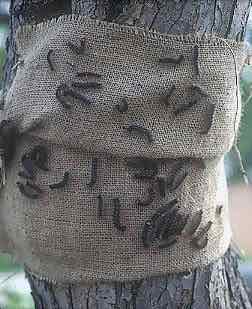 Prolonged cold weather in previous winters has protected our region from major infestations, but with the current warming trend we may no longer be able to rely on nature’s means of control. Hopefully we had sufficient cold weather this past winter, but if you do find these pesky little fellows on your trees, it will be in your long term interests and your neighbours’ to try and reduce their numbers – they do travel with the wind from island to island. 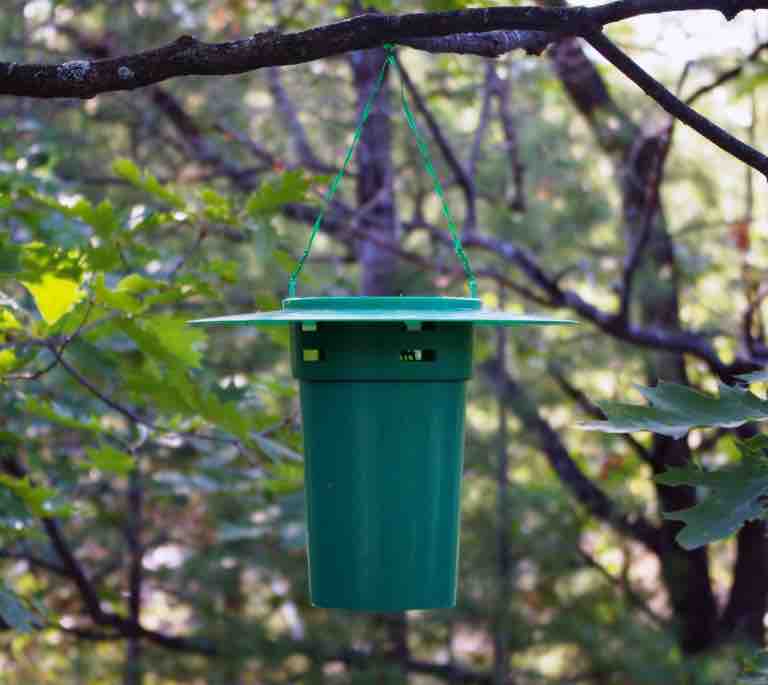