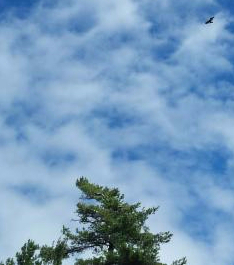 Both eaglets have been getting out every day on the breezes and floating around. Thanks to Rebecca Middleton, we can see them closely in the sky from this picture!  “The eaglets are taking turns leaving the nest and flying around.  One will fly and land, then rest and then the other will fly, but not too far and then land and rest.   The one calls and calls and calls every time it is out flying around. The parents are feeding them only once a day now.”
Did you know that as adults, they can climb to an altitude of 10,000 feet? During level flight, a bald eagle can achieve speeds of about 48 to 56 kph. (30 – 35 mph)!
The question was asked as to whether the Bald Eagles migrate…and hope you will read the answer in our Nature Section. Or just enjoy listening to the Bald Eagle…(Takes a few minutes to load up.)

Remember that the wonderful Junior Naturalist Program has been rescheduled for Sunday, August 23rd from 10:00 a.m. to noon. So mark your calendars now and check back for further details regarding this outstanding program.   Questions: Contact Nancy Regan